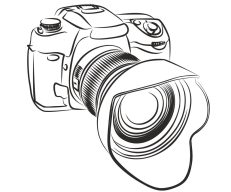 She fixed her hair in one of several smudged mirrors surrounding the half-empty loft.

The photos looked nothing like her. Which was a good thing. She never gives photographers or agents her real name. To them, she’s Diamond. In case she ever ran for political office. In case she married a megachurch pastor. Everyone everywhere had a doppleganger somewhere in the world. Her’s was Diamond.

She straightened her back. “This good?”

The photographer lowered his camera towards her thighs.

“Nothing.” He Glared at her over the camera lens.

“Don’t be sorry, be faster please.”

The money he offered was going to pay off her tuition for the semester. And, though he was inches shorter than she was in flats, he was three times her size in girth. She needed to watch her tone.

The photographer approached her.

She forced a smile. “Done?”

The photographer’s wore an aromatic musk was something she expected from a tall, coco flavored Wall street hottie with muscles and a full head of hair. His aroma created conflict between her eyes and nose. A stout, balding man with a stretched out wife beater should smell the opposite.

The photographer reached for her vest.

She immediately pulled away. “Excuse me!”

“These will all be tasteful shots.”

She left her stool. “Yeah… right.”

“I didn’t mean to alarm you.” The photographer put his camera aside.

She scooped her clothes from the photographer’s unfolded futon and marched towards the door.

She didn’t deserve a doctorate. Nobody in their right mind would agree to enter a strange man’s warehouse apartment to take semi-nude photographs for a blog she’d never heard of.

“Towards your college debt, Ms. Thompson.” The Photographer smiled.

The stack was tall. Thick. Greener than green.

“How many shots?” She asked.

“Only need three to publish.”

She returned to her stool.

“Panties remain.”  She opened her vest. “Hurry up.”

“Okay…” Photographer waved his hand. “Just need you to move your-”

She moved her arms to expose her breasts.

He lowered his camera.

She covered her chest. “What now?”

“One sec.” The photographer took off towards his room.

He could be back there gathering rope and electrical tape.

She exposed her breasts. “Yes, sir.”

She side-eyed the camera.

Wait… He called me Ms. Thompson… I never told him my name…

I'm a professional storyteller, content marketer, award-winning filmmaker and film collective cofounder who creates high-quality, outside-the-box, thoughtful and entertaining content for businesses, non-profits, entertainment entities and for your pleasure. I was born and raised in Brooklyn, but I am currently living in the DC Metro area with my wife and elderly pup, where I work as the Director of Marketing and Media at a top producing real estate company on Capitol Hill. View all posts by darrionjwrites